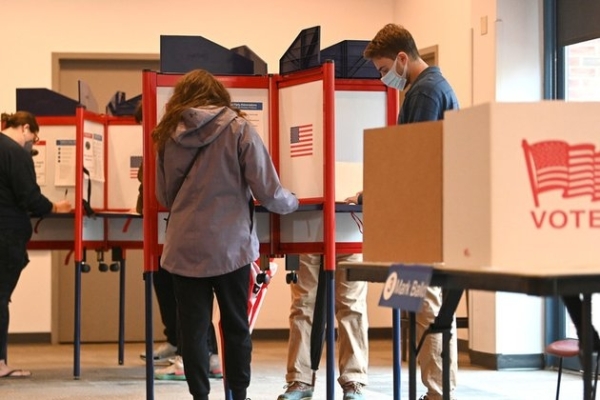 US Vice President Kamala Harris and White House Press Secretary Jen Psaki have attempted to explain President Joe Biden appearing to cast doubt on the legitimacy of future US elections, with Psaki even taking aim at his predecessor, Donald Trump.

During an appearance on NBC on Thursday, host Savannah Guthrie told Harris it was "astonishing" to see the president "openly cast doubt" on future elections.

The remarks in question occurred during a lengthy press conference a day earlier. Biden hesitated in saying whether 2022 midterm elections would be "fairly conducted" and "legitimate" if Congress failed to pass the specific voting legislation his administration has been unsuccessfully pushing for months.

"It easily could be illegitimate," Biden said. "Imagine if, in fact, Trump had succeeded in convincing Pence to not count the votes [in 2020]."

Biden later added that the potential illegitimacy of future elections is "in direct proportion" to being able to get specific reforms from the Democratic Party pushed through Congress.

Harris claimed in her NBC interview that Biden has "been consistent" on the issue of voting rights, refusing multiple times to directly say whether the failure to pass voting reform bills would make upcoming elections "illegitimate." She did, however, accuse Republicans of passing laws restricting voting access under the guise of security.

Harris’ interview and non-answers were mostly mocked on social media, and Psaki found herself attempting to explain the president’s words only hours later.

According to Psaki, Biden actually meant the "opposite" of what his critics thought.

"Let’s be clear," she tweeted, then explaining the president was attempting to say the results would be "illegitimate" only if states followed Trump’s lead. "[Joe Biden] was not casting doubt on the legitimacy of the 2022 election. He was making the opposite point."

Biden was explaining, according to Psaki, that the results would be "illegitimate" only if states "do what the former president asked them to do after the 2020 election: toss out ballots and overturn results after the fact."

"The Big Lie is putting our democracy at risk," she said, referring to the former president’s continued insistence that the 2020 presidential election was fraudulent. "We’re fighting to protect it."