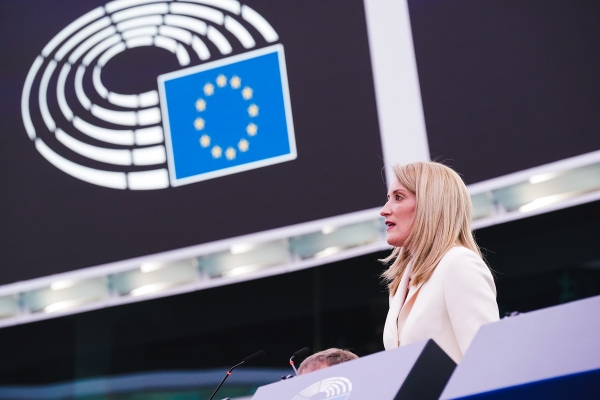 Roberta Metsola won the election in the first voting round, where she received an absolute majority of 458 votes out of 690 cast in the remote secret vote, among three candidates. At the beginning of the day’s proceedings, Kosma Złotowski (ECR, PL) withdrew his candidacy, bringing the number of candidates down to three.

President Metsola will lead the Parliament in the second half of the current legislative term, until a new Parliament is constituted following the 2024 European Elections.

Who is Roberta Metsola

Born in Malta in 1979, Roberta Metsola who has been an MEP since 2013, is the youngest EP President ever elected. She became first vice president in November 2020, and was Parliament’s acting president after President Sassoli passed away on 11 January. She is the third female President of the European Parliament, after Simone Veil (1979-1982) and Nicole Fontaine (1999- 2002).

Addressing the House immediately after she was elected, President Metsola said: “The first thing I would like to do as President is to think about David Sassoli’s legacy: he was a fighter; he fought for Europe and for us, for this Parliament. I will honour David Sassoli as President by always standing up for Europe, for our common values of democracy, dignity, justice, solidarity, equality, the rule of law, and fundamental rights.

“I want people to recapture a sense of belief and enthusiasm for our project. Dear Europeans, in the next years, people across Europe will look to our institution for leadership and direction, while others will continue to test the limits of our democratic values and European principles. We must fight back against the anti-EU narrative that takes hold so easily and so quickly. Disinformation and misinformation, further amplified during the pandemic, fuel easy cynicism and cheap solutions of nationalism, authoritarianism, protectionism, isolationism,” she added.

President Metsola underlined: “Europe is about precisely the opposite. It is about all of us standing up for one another, bringing our people closer together. It is about all of us defending those principles of our founding mothers and fathers that led us from the ashes of war and holocaust to peace, to hope, and to prosperity. Twenty-two years ago, Nicole Fontaine was elected 20 years after Simone Veil. It will not be another two decades until the next woman is standing here,” she said.

A full version of the president’s address is available here.

Candidates’ presentations before the vote

The three candidates gave brief presentations before the first round of voting. You can watch their speeches here, or select individual speakers respective speeches by clicking on their respective names:

The president enjoys a broad range of executive and representative powers set out in Rule 22. Other than these duties, the president’s authority extends to “all powers that are necessary to preside over the proceedings of Parliament and to ensure that they are properly conducted”. The decisions that have ensured the smooth functioning of Parliament since the COVID-19 pandemic began are a key example of this.

Article 14 of the Treaty on the European Union states that Parliament elects its president from among its members. Since the first European Elections (universal suffrage) in 1979, each president is in office for a renewable period of two and a half years. This means that there are normally two presidents in each legislative term. There have been 31 presidents since the Parliament was created in 1952, 17 of whom have served since 1979.