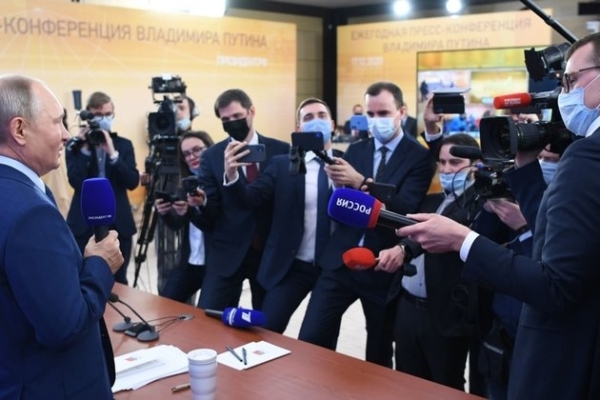 Russian President Vladimir Putin will hold his annual end-of-year press conference in Moscow at a time of high tensions between his country and the West, with Russia massing forces near its border with Ukraine and calling for ‘security guarantees’ that would block NATO enlargement and drastically restrict the alliance’s activity across the former Soviet Union.

The December 23 event will be held in person in the Manezh Exhibition Center, with strict COVID-19 protocols enforced. Because of pandemic restrictions, Kremlin spokesman Dmitry Peskov said on December 22 only about 500 international and domestic journalists had been invited to participate, while in recent years more than 1,000 attended.

Journalists were being required to submit three negative PCR tests in order to enter the hall.

In recent weeks, the United States, NATO, and Kyiv have raised the alarm over some 100,000 Russian troops deployed near the border with Ukraine and in the Russia-occupied Ukrainian region of Crimea, with U.S. officials saying Moscow is planning for a possible military offensive that, if it happens, could come within weeks.

More than 13,200 people have been killed in fighting in parts of eastern Ukraine between Kyiv and Russia-backed separatist formations since early 2014.

The military buildup has become the backdrop for Putin’s push for the United States and NATO to give Russia sweeping ‘security guarantees’ that would drastically alter the post-Cold War order, barring NATO from expanding further to the east and leaving Ukraine and several other countries as buffer states with limited sovereignty when it comes to military affairs.

Putin has said he does not want a war but has been adamant that if new fighting breaks out, it will be the fault of Kyiv and the West. He has made baseless claims about U.S. and Ukrainian deployments to support that argument.

The Kremlin and the U.S. administration have said they plan to hold bilateral talks next month on the security issues.

SEE ALSO: What To Watch For When Putin Meets The Press

Domestically, the Russian government in 2020 designated dozens of organizations and individuals as "foreign agents," subjecting them to restrictions and criminal liability. International and domestic critics have accused the Kremlin of using its so-called "foreign agent" laws to stifle dissent and persecute political opponents.

Speaking to Current Time on December 22, Novaya Gazeta editor in chief Dmitry Muratov, who shared this year’s Nobel Peace Prize, said 2021 had been a "nightmare year" for Russian journalists because of the designations.

No Novaya Gazeta journalists were invited to participate in Putin’s press conference.

Putin has held the press conference every year that he has been president since 2001. It’s one of three lavish and carefully orchestrated public events held most years along with his state-of-the-nation address to parliament and his Direct Line call-in question-and-answer program.

Each press conference since 2004 has been at least three hours long, with the longest coming in last year at 4 1/2 hours.

Share this: Putin To Hold Annual Press Conference As Tensions Over Ukraine Soar