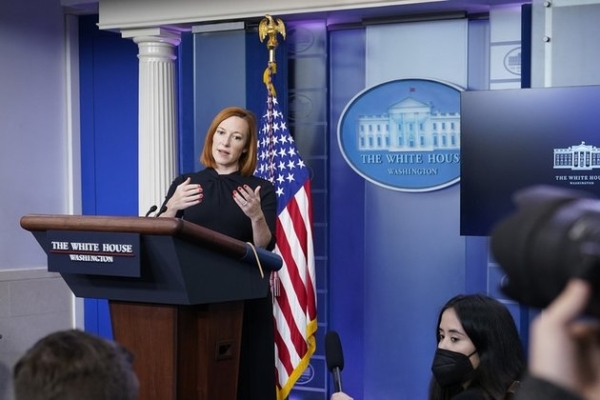 The US and NATO have no ?aggressive intent? towards Russia, White House Press Secretary Jen Psaki said, dismissing Russia’s warnings of a ?military-technical? response to any hostile steps as rhetoric not aimed at the US.

Asked during a press briefing on Wednesday whether the US administration is concerned about the retaliatory measures promised by Moscow, Psaki said the ongoing diplomatic contacts were a "good sign" for strained US-Russia ties.

"The good sign is that there’s an open line of diplomatic discussion and engagement that is happening and we expect to continue, we hope to continue," Psaki stated.

At the same time, she brushed off the warnings issued by Russia’s President Vladimir Putin, who said Moscow will take "appropriate military-technical measures" should the West continue with its "clearly aggressive stance."

The remarks were not meant for the American audience altogether, Psaki claimed, apparently implying that it was merely tough talk for domestic consumption.

The warnings were produced by Russia’s president during a meeting with the country’s top brass on Tuesday. Putin said he no longer viewed the West as a reliable partner, reiterating his goal of reaching long-term, legally-binding security guarantees. At the same time, he warned that the country is capable of producing an appropriate response to the continuing hostile actions.

"If our western colleagues continue with this clearly aggressive stance, we will take appropriate military-technical measures in response and react harshly to hostile steps," Putin said. "And I want to stress that we are within our rights to do what is required to ensure Russia’s security and sovereignty."

The White House press secretary also reiterated the stance that the US and NATO pose no threat to Russia, while yet again blaming it for "aggression" against Ukraine.

"NATO is a defensive alliance, we don’t have aggressive intent with Russia, the United States doesn’t, neither do NATO partners. And certainly the aggression we’ve seen at the Ukrainian border, the bellicose rhetoric has been coming from one side," Psaki stated.

Over the past few weeks, top Western politicians have repeatedly claimed Moscow was seeking to invade the neighboring country, using the movement of Russian troops within Russia’s own territory as ‘proof’ for the alleged preparation for assault. Moscow has consistently denied such claims, insisting it is allowed to move its military unit wherever it pleases within Russia’s borders.