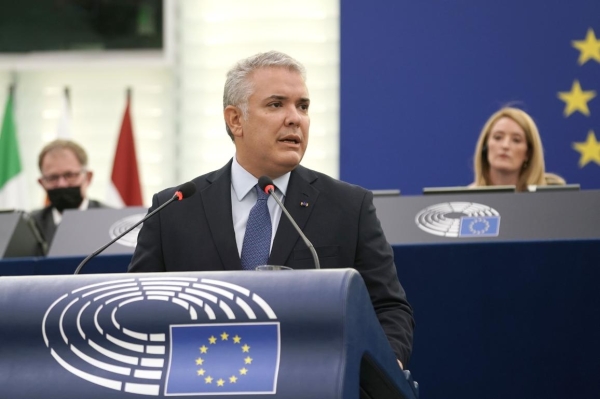 Speaking at the start of Parliament’s session, EP President Roberta Metsola conveyed her solidarity with the victims of Colombia’s decades-long conflict. President Metsola also acknowledged that Colombia has led by example in welcoming 1.8 million displaced Venezuelans and granting them access to essential services.

In his speech in Strasbourg’s hemicycle, President Duque advocated international cooperation and multilateralism, saying: “Europe’s needs Latin America, and Latin America needs Europe”. Referring to the increasing geopolitical tension caused by Russian threats to Ukraine, President Duque said all countries must be sovereign and able to decide freely – without intimidation – whether to join a multilateral organisation. In case of military aggression against Ukraine, “Colombia will accompany the sanctions imposed at international level”, he said.

Duque said Colombia has managed to respond to the worst migration crisis in Latin America without turning to xenophobia. He welcomed international support, but asked for the acceleration of the disbursement of aid that has been committed to help improve the situation. “But what is truly necessary is end the root cause of this tragedy, the opprobrious dictatorship of Nicolás Maduro, that every day generates more diaspora and a worsening of the social fabric of Venezuela”, he added.

The Colombian President also welcomed the announcement that the European Parliament will send observers to the electoral processes in Colombia in March (legislative elections) and May-June (presidential elections).

You can re-watch the formal address and the press conference by Presidents Metsola and Duque.