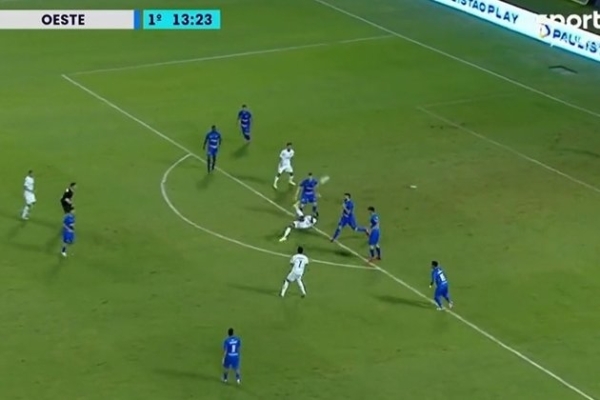 Despite not turning 16 until late July, Endrick is already playing with the Sao Paulo giants’ U-20 outfit in the Copinha tournament that showcases the talents of tomorrow in South America’s biggest country.

Helping his side reach the quarterfinals, he had already raised eyebrows by netting four goals in two outings despite playing in just a half each match and saved his best effort yet for the last 16 clash against Oeste.

Palmeiras were already leading 2-0 with less than a quarter of an hour down on the clock when a defender attempted to clear the ball out of the box with a poor header in the eventual 5-2 win.

With his back to goal on the edge of the 18-yarder, Endrick let off a sensational bicycle kick that lobbed the goalkeeper and flew into the top corner.

"What is that?" asked the Brazilian commentator as the prodigy slid to his knees on a clip that has gone viral on Twitter.

There, fans and pundits rushed to voice their approval for a figure who is "currently the greatest prospect in Brazilian youth football".

"This kid is ridiculous," beamed a compatriot reporter based in Lisbon. "We’ve got something special here."

A punter demanded that Endrick should be called up to Tite’s senior Qatar 2022 squad, as "these types of talents always end up as World Cup winners".

"How does Brazil do this?" it was asked. "He is 15 but already technically better than a lot of much older pros. He must be taken care of and not rushed.

Backing this, a separate party said that the Brazilian FA, the CBF, "needs to make sure he doesn’t get to Europe until he’s at least 20".

"He’s your new hope, similar to Romario in style in my opinion, and maybe story, i.e. [he will] win your first World Cup in decades."

Such comments are made due to a commonly-held belief that Brazilian wonderkids are leaving home too early which stunts their development.

Whereas in the 90s the quality of the Brazilian Serie A was much higher than in the modern era, talents such as Rivaldo, Romario, Cafu and Roberto Carlos to name but a few did not cross the Atlantic until they were already well into their 20s and fully evolved at home, which also benefitted the national team.

But with many clubs drowning in debt, the CBF are powerless to stop them taking big money offers from the likes of Real Madrid, who paid $51 million dollars each for Vinicius Jr. and Rodrygo from Flamengo and Santos respectively before their 18th birthdays.

Backed by payday loans firm Crefisa, Palmeiras are in better shape financially but will still be tempted by multimillion dollar proposals for their Nike-sponsored athlete who has netted 165 goals in 169 matches for them so far, is represented by the same agent as Vini Jr., and has also caught the eye of Barcelona and Manchester United.