US, Russia to Hold Talks in Bid to Ease Ukraine Standoff Thursday, 23 December 2021 "We don’t want a war," Lavrov said. "We don’t want to take the path of confrontation. But we will firmly ensure our security using the means we consider necessary," he said in an interview with Russian RT television.

Lavrov also said Russia would hold separate discussions with NATO, but that talks should not be dragged out. "I hope that they will take us seriously given the moves we take to ensure our defense capability," he added.

Amid soaring geopolitical tensions over Ukraine, Russia last week presented the United States with draft treaties outlining a set of "security guarantees" the Kremlin is demanding, including a halt to any further enlargement of NATO and a commitment by the alliance not to deploy additional troops to countries that did not already have NATO ground forces present before 1997. That includes Poland, Hungary, the Czech Republic and the Baltic states, which are all NATO members. 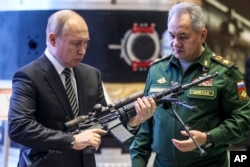 U.S. and Western officials fear Russian President Vladimir Putin is contemplating a repeat of 2014, when Moscow annexed Crimea and Russia used armed proxies to seize a large part of the Donbass region in eastern Ukraine. The White House believes it only has a "four-week window" to stave off a potential Russian invasion of Ukraine.

Sergei Ryabkov, Russia’s deputy foreign minister, Monday dismissed claims Moscow is planning to attack Ukraine. But Russian officials have sounded increasingly belligerent. Putin on Tuesday used some of his most direct language so far about the escalating Ukraine standoff with the U.S. and NATO, telling top military officers in Moscow that if NATO does not stop what he says is aggressive behavior in Ukraine, Russia would respond in a "retaliatory military" manner.

"If the obviously aggressive line of our Western colleagues continues, we will take adequate, retaliatory military-technical measures [and] react toughly to unfriendly steps," Putin said in comments broadcast by Russian media.

US Says It Is Ready to Start Talks With Russia

While the United States and its NATO allies have said they’re willing to enter talks with Russia, Western diplomats have warned the Russian proposals aren’t acceptable in their current form. In a conference call with reporters Tuesday, U.S. Assistant Secretary of State Karen Donfried said talks would have better prospects if Russia deescalated its military buildup along its border with Ukraine.

"Any dialogue with Russia must address NATO’s and others’ concerns about Russia’s continued threatening behavior and be based on the core principles and foundational documents of European security. We will not compromise the key principles on which European security is built, including that all countries have the right to decide their own foreign and security policy course free from outside interference," she said.

U.S. and NATO officials have been adamant that it is unreasonable for Moscow to seek a veto over the foreign policy direction chosen by Kyiv.

Already high gas prices in Europe climbed once again midweek when flows through the Yamal-Europe pipeline to Germany stopped on Tuesday. The halt came after days of restricted supplies, which Gazprom, the state-owned energy giant, said had been necessary because of cold weather and high demand in Russia. The wholesale Dutch gas price, the benchmark for European prices, rose more than 20 percent midweek.

Gas supplies from Russia have fallen far short of pre-pandemic levels for months and this year have been almost a quarter below those in 2019. Western politicians have accused the Kremlin of using Russia’s vast gas reserves as a political weapon, aimed at cajoling the Europeans to accept Russian security demands. 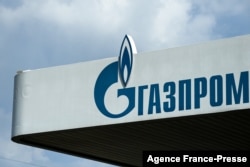 FILE — The logo of Russia’s energy giant Gazprom is pictured at one of its gasoline stations in Moscow, April 16, 2021.

In September, Gazprom also cut supplies by one-third to the former Soviet republic of Moldova, sparking a state of emergency in the country. Moldova aspires to join the European Union and has told Moscow it should not interfere in its efforts to do so.

The White House has said it will discuss Russia’s proposed "security guarantees" with European allies but has emphasized for days that Moscow would not be allowed to interfere in the foreign policy and security decisions of sovereign states. U.S. officials have also emphasized that there can be no separate bilateral deals made between Washington and Moscow over European security arrangements. NATO allies have to be fully involved, they say.

The unusual decision of the Russian Foreign Ministry to publish their draft treaties shortly after handing them to American officials has added to questions about the Kremlin’s sincerity in negotiating.

"The substance of the drafts and the way the Russians publicized them do not suggest a serious negotiating bid," says Steven Pifer, a former U.S. ambassador to Ukraine and now senior fellow at the Brookings Institution, a Washington-based research group.

"The unacceptable provisions in the two draft agreements, their quick publication by the Russian government, and the peremptory terms used by Russian officials to describe Moscow’s demands raise concern that the Kremlin may want rejection. With large forces near Ukraine, Moscow could then cite that as another pretext for military action against its neighbor," he said in a Brookings commentary.

Pifer added that if the draft agreements are part of "an opening bid," and Moscow is seeking a serious exchange, some draft provisions, including a proposed ban on the deployment of intermediate-range nuclear missiles and consultative mechanisms, could offer a basis for negotiation.

Share this: US, Russia to Hold Talks in Bid to Ease Ukraine Standoff