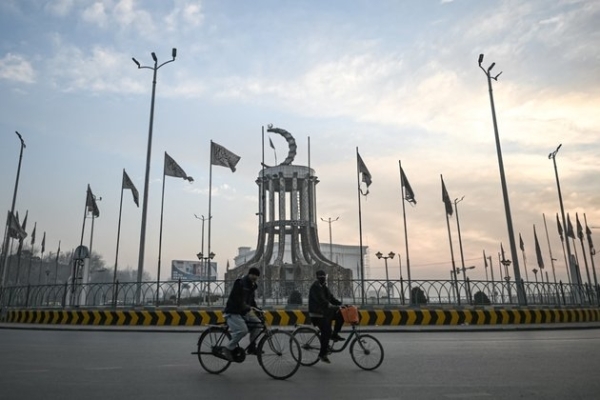 ISLAMABAD — The stunning Taliban takeover of Afghanistan in mid-August and the chaotic final U.S. military withdrawal from the country later that month marked an end to America’s longest war, spanning almost two decades, in the outgoing year 2021.

Several weeks after the September 11, 2001, terrorist attacks on the United States, American and allied troops invaded Afghanistan and swiftly removed the Islamist Taliban from power for harboring al-Qaida leaders responsible for the carnage.

But the Taliban quickly regrouped and waged a deadly insurgency against the Western-backed government in Kabul and international forces.

On August 15, the insurgent group marched into the capital city after overrunning the rest of the country in just 10 days in the wake of a shockingly rapid collapse of Afghan government forces-whom the U.S.-led coalition trained and equipped for years.

Some of those forces pointed to a lack of food, ammunition and air support. Others surrendered or fled the battlefield after striking deals with the advancing insurgent fighters. 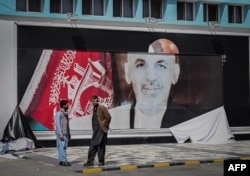 FILE — Afghan men stand next to a torn poster of Afghan President Ashraf Ghani at the Kabul airport in Kabul on August 16, 2021.

President Joe Biden and his administration defended his decision to bring all troops home, saying they had long achieved the mission of diminishing al-Qaida and preventing Afghanistan from ever being a terrorist haven.

"This summer, we made good on that promise. ... We knew this would be challenging," Secretary of State Antony Blinken told a late December news conference in Washington.

"But this is also the first time in 20 years that no U.S. troops are spending the holidays in Afghanistan, and we’re not sending a third generation of American soldiers to fight and die there," Blinken said.

The Taliban’s return to power prompted concerns, however, about whether the Islamist rulers would cut ties with terrorist groups like al-Qaida, govern the country effectively and respect human rights of all Afghans, especially women. It also raised questions about the U.S. war and ensuing nation-building effort that cost Washington an estimated $2 trillion and the lives of at least 2,400 service members.

Critics such as former U.S. diplomat Robin Raphel, senior associate at the Center for Strategic and International Studies in Washington, attempted to sum up the troubled Afghan mission while addressing a seminar in Pakistan.

"After 9/11, the U.S. came in anger to Afghanistan, seeking revenge in a country whose history and culture it did not understand that well. It then fell victim to mission creep, trying to create a Western model of democracy on an accelerated timetable at the point of a gun," she said.

"This resulted in massive corruption, inequality and a fragile [Afghan] government with limited legitimacy living in a bubble in Kabul. So, the Taliban movement, which was in many ways more indigenous and closer to ground reality, made persistent gains, and in the end the government collapsed," Raphel added. FILE — Hundreds of people run alongside a U.S. Air Force C-17 transport plane as it moves down a runway of the international airport, in Kabul, Afghanistan, Aug.16. 2021.

Meanwhile, the evacuation left hundreds of American citizens and thousands of Afghan allies behind. Rights groups reported abuses and revenge killings of U.S. allies in the months that followed.

The Afghan economy was heavily dependent on foreign financial assistance over the past 20 years. The Taliban’s return to power prompted Washington to suspend its cash flow, eliminating 40 percent of the country’s gross domestic product and 75 percent of the government’s budget.

The Biden administration also has seized Afghanistan’s roughly $9.4 billion worth of assets, largely held in the U.S. Federal Reserve, and imposed financial sanctions on the Taliban, crippling the country’s troubled banking system, with the Afghan currency losing value rapidly.

"Afghanistan’s economy is now in free fall, and if we do not act decisively and with compassion, I fear that this fall will pull down the entire population with it," U.N. humanitarian chief Martin Griffiths warned. People hold a banner reading ‘Let us eat’ before marching down the street during a protest in Kabul, Afghanistan, Dec. 21, 2021, as the country struggles with a deep economic crisis.

The Taliban have been demanding the release of frozen funds while international aid agencies say the financial restrictions are hampering relief operations in the country.

The U.N. estimates more than half of the nearly 40 million population face starvation, with 1 million children at risk of dying of "severe acute malnutrition."

A group of 46 mostly Democratic lawmakers wrote a letter to President Biden on December 21, asking him to quickly ease ongoing punitive sanctions and unblock the Afghan reserves to avert a humanitarian disaster in the South Asian nation.

The Biden administration maintains that the status of the Afghan reserves is the subject of ongoing litigation brought by victims of the September 11, 2001, attacks and other terrorist incidents "who hold judgments against the Taliban."

Washington also faces difficult questions around how the funds can be made available to directly benefit the Afghan people while ensuring the Taliban do not benefit from them as the group remains sanctioned by the U.S. as a specially designated global terrorist group.

The U.S. Treasury decided earlier in December to allow personal and non-personal remittances to be made to Afghans. Washington also played a role in arranging the transfer of $280 million from the World Bank-administered Afghanistan Reconstruction Trust Fund (ARTF) to support humanitarian activities.

Critics say the U.S. and the international community should look seriously at engaging with the Taliban to address the looming humanitarian crisis, without giving them diplomatic recognition. 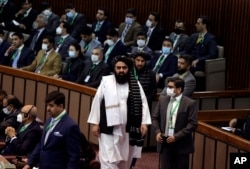 "The fact is the United States fought and lost a 20-year war against the Taliban, and it is hard to imagine that that reality doesn’t color the perspectives of some in Washington," said Laurel Miller, director of the Asia program at the International Crisis Group.

"But I also think that if you step back from that reality and look at the broader picture of U.S. interests, I think it’s quite shortsighted to be complicit in the humanitarian catastrophe that is unfolding there," said Miller, who served as acting U.S. special representative for Afghanistan and Pakistan.

There are growing fears that economic and humanitarian upheavals will force more and more Afghans to try to leave the country.

The Biden administration is pressing the Taliban to ensure they cut ties with terrorist groups, end reprisals against Afghans affiliated with the deposed government, govern the country inclusively, and allow women and girls to fully participate in public life and get an education.

Taliban leaders have promised to rule the country differently from their previous regime when women were barred from leaving home unless accompanied by a male relative and girls were not allowed to attend schools.

Most girls are barred from returning to the classroom under the current Taliban regime, but officials insist they eventually will resume classes once the government has enough funds to pay salaries to tens of thousands of unpaid teachers and ensure a "safe environment" for female education across Afghanistan.

"We consider human rights, women’s rights and participation by all capable Afghans from various regions our duty. We have done much in this regard and will continue to take further steps," Taliban Foreign Minister Amir Khan Muttaqi told an emergency conference on Afghanistan organized by Islamic countries in Pakistan on December 19. 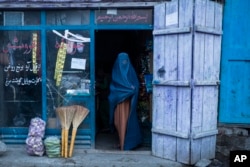 "Women’s rights have come under immense pressure. All young women who went to school over the past 20 years to have a career now see their professional prospects dimmed," said analyst Torek Farhadi, a former Afghan official.

Analysts say the international community can still influence the Taliban to moderate their polices in exchange for diplomatic recognition and conditional access to frozen funds to avoid a catastrophe in Afghanistan.

Share this: War Ends in Afghanistan but Uncertainty, Starvation Loom