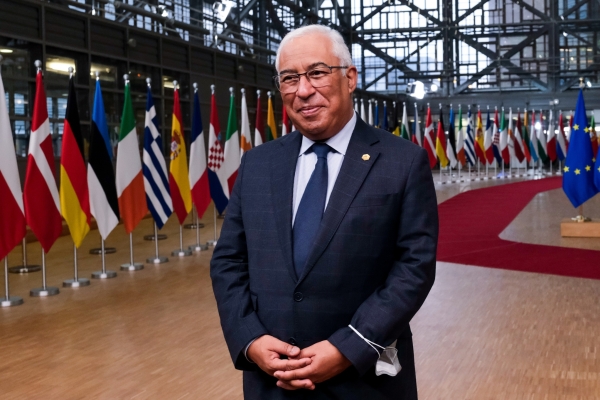 Nine members of the European Parliament are on a fact-finding trip to Ukraine from 30 January to 1 February, to gather information on the current crisis. MEPs will observe the situation on the ground, and want to show the EU’s solidarity with the Ukrainian people as well as European unity in the face of Russian aggression.

The leaders of the delegation, the Chairs of the Foreign Affairs Committee and the Security and Defence Subcommittee David McAllister (EPP, DE) and Nathalie Loiseau (Renew, FR) will hold a press point in Mariupol today (31 January).

Portuguese Prime Minister António Costa (pictured) won a ringing victory in this Sunday’s elections. The socialist led government did surprisingly well, given recent defeats in the election of the president and mayoral elections for Lisbon.

On Wednesday (2 February) European Commission Executive Vice President Margrethe Vestager will present her Standardisation Strategy. The idea is that standardisation will play an important role in promoting the EU’s industrial strategy and in supporting the Europe 2020 Strategy for smart, sustainable and inclusive growth.

Standardisation is an important feature of the EU’s digital agenda delivering interoperability between devices, applications, data repositories, services and networks; and also of the green agenda encouraging eco-innovation.

Will have a committee meetings this week:

Ukraine: Members from the Foreign Affairs Committee and the Security and Defence Subcommittee will travel to Ukraine, where they will go to Kyiv and East Ukraine, to gather information on the ground on the current security crisis and show their support to Ukraine (Sunday 30 January to Tuesday 1 February).

Europol/deletion of personal data: The Civil Liberties Committee will discuss with Europol Deputy Executive Director Jürgen Ebner and the European Data Protection Supervisor (EDPS), Wojciech Wiewiórowski, the recent data erasure order sent by the EDPS to the EU law enforcement agency. In the order, Europol was asked to delete large quantities of data that it had stored despite there being no established link to criminal activity (Tuesday).

Maria Ressa: MEPs from the Special Committee on Foreign Interference and Disinformation, in association with the Internal Market and Consumer Protection Committee, will hear from Maria A. Ressa, 2021 Nobel Peace Prize laureate, journalist, author, and co-founder and CEO of Rappler, a Philippine online news website, on how to address disinformation and protect freedom of expression on online platforms (Tuesday).

Conference on Afghan Women: The conference will gather MEPs, prominent Afghan women who were finalists for the 2021 Sakharov Prize, Commission and UN representatives as well as other international organisations, to address and cast light on the extremely worrying situation for women in Afghanistan, following the Taliban’s return to power last year (Tuesday).

Eurozone/Donohoe: The Economic Affairs Committee will hear from Eurogroup President Paschal Donohoe on the state of the Eurozone. MEPs are likely to raise questions on the reform of monetary and fiscal policies, EU countries’ public finances, inflation and the impact of national recovery plans (Wednesday).

President Metsola’s diary: EP President Roberta Metsola will meet Czech Republic’s Speaker of the Senate Miloš Vystrčil and Speaker of the Chamber of Deputies Markéta Pekarová Adamová, as well as deliver the opening speech for the High-level Conference on Afghan Women, on Tuesday. On Thursday, President Metsola will have a call with the Speaker of Morocco’s House of Representatives, Rachid Talbi El Alami, as well as meet Netherlands’ Prime Minister Mark Rutte and North Macedonia’s Prime Minister Dimitar Kovachevski.

On Thursday there will be the regular monthly press conference by President of the European Central Bank (ECB) Christine Lagarde following the Governing Council meeting of the ECB in Frankfurt. All eyes will be on whether there will be a change to interest rates in response to inflationary pressures.

Share this: Week ahead: MEPs visit Ukraine as tensions with Russia mount